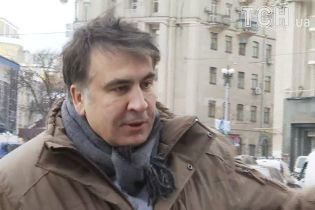 An official statement about their deportation from Ukraine, Mikheil Saakashvili promised to do on Tuesday. Recently ex-head of the Odessa regional state administration came out of the VIP terminal of Chopin airport, said in the story TSN.19:30.

Journalists a few hours watched Saakashvili in all the airports of Warsaw, as it was not known where and when brought. From Kiev waited and military aircraft, and Charter flights, and conventional aircraft. In the end, it turned out that Saakashvili arrived on a Charter and it was met by border guards of Poland. The procedure lasted about an hour, and then deprived of citizenship of Ukraine, ex-official legal status. Because Saakashvili has a wife-a citizen of the EU, it could not accept.

With journalists, Saakashvili spoke briefly. He thanked the Polish border guards, and noted that they acted professionally and took it very well. The actions of the Ukrainian security officials he criticized, and his detention and expulsion called illegal. “The statement I will do tomorrow. I very well welcomed by the Polish side. The actions of the Ukrainian side was extremely outrageous and lawless. It was a kidnapping – the illegal kidnapping. But the poles are very kind and I appreciate it,” – said the politician. Then he left to check in to the hotel, whose name is not yet known.

Saakashvili came to Warsaw on a Charter flight. Ukrainian border guards handed over the policy of the Polish. Poland adopted Georgian, because his wife is a citizen of the European Union.