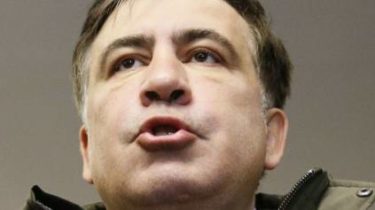 The leader of RNS Mikheil Saakashvili was returned to the country of their previous stay. This was announced by the speaker of the state border guard service Oleg Slobodyan.

According to him, today, 12 February, the military of the State border service together with representatives of the Migration service and the national police informed the policy decision about his return to the country of previous stay.

“However, during the procedure for law enforcement officers was attacked by unknown from the environment of Mikhail Saakashvili. The border guards were forced to defend themselves and used the power support”, – stated in the message.

On the situation with Saakashvili on February 12, the servicemen of state frontier service together with representatives Mgr…

In accordance with the decision of the court of Mostiska of Lviv region concerning illegal crossing of the border, Saakashvili and dismissal policy on the recognition of refugee status or person who needs complementary protection, it returned to the country where he came from.

“In accordance with viice court decisions the person was on the territory of Ukraine illegally, and therefore, in compliance with all legal formalities had returned to the country where he arrived violating the domestic legislation,” wrote said.

He did not specify the name of the country, however, earlier it was reported that the Ukrainian border, Saakashvili crossed in Lviv from Poland.

Information about the deportation of Saakashvili confirmed and MP and adviser to the interior Minister Anton Geraschenko. According to him, politics was taken from Ukraine due to violations of immigration laws.

“What to do in any civilized country with persons not entitled to reside on its territory? That’s right, they send into the territory of the state from which they came. In this case, Poland”, – quotes RBC quote Gerashchenko.

In the NCR, in turn, added that the plane, which can be their leader, should any minute to land in Warsaw.

Imore litak s microdenier by Mikhailov Saakashvil on Board for be called a few more minutes to land at the airport Warszawy! Of about…

We will remind, on Monday, February 12, in Kiev, near the restaurant “Suluguni” in Museum street detained leader of the “Movement of new forces” of Mikheil Saakashvili. Associates policy argued that it should take to the airport “Borispol” to be deported from Ukraine.