Any expulsion or extradition of Saakashvili are illegal – RNS 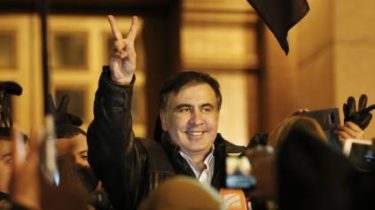 In the party “movement new forces” stated that any expulsion or extradition of Mikheil Saakashvili are illegal.

This was reported by one of the leaders of the “RNS” Yuriy Derevyanko.

“We demand that Lutsenko, Avakov, Gritsak and Chairman of the Border service to immediately tell who was kidnapped Saakashvili and where it is!” – said Derevianko.

It should be noted that according to the source TCH.ia Mikheil Saakashvili has left for Poland. According to sources, the politician flew on a Charter flight at about 16:00 Kyiv time.

In turn, member of the political Council of the party “DNS” Ivan Slobodyanik also noted that in Zhulyany was a lot of police, they blocked the entrance and other entrances to the airport.

In the PGO, the SBU and the interior Ministry denied the arrest of Saakashvili

According to the lawyer Saakashvili Ruslan Chernovetskogo, 10-12 unknown people in military uniform without presenting official documents today, February 12, ran into the restaurant, grabbed Mikhail Saakashvili and taken in an unknown direction.

“Two vans was captured on photo. We’re still trying to figure out who did it, where he was taken, on what basis”, – said the lawyer.

Chernolutsky also stressed that there were no grounds for the expulsion of Mikheil Saakashvili from Ukraine: “Saakashvili is located in Ukraine legally, his certificate is valid on the basis of the law “On status of refugees and persons which need additional protection.”

He also added that the court’s decision in favor of the State migration service appealed to the court of cassation, and during its consideration in the appeal, Saakashvili is located in Ukraine legally.

According to the lawyer, extradition Saakashvili also impossible, because the extradition check in respect of extradition to Georgia is not yet complete.

“Readmission to Poland because Poland didn’t agree to return it to its territory,” said Chernolutsky.

“The complaint was filed after a phone call to the Pechersk district police Department. Police received explanations from the employees of the restaurant, as well as those who were with Michael at the time of the theft, ” – said in the message “DNS”.

Later it became known that the leader of RNS Mikheil Saakashvili was returned to the country of previous stay. This was announced by the speaker of the state border guard service Oleg Slobodyan. According to him, today, 12 February, the military of the State border service together with representatives of the Migration service and the national police informed the policy decision about his return to the country of previous stay.

Note that the country name is not specified, but earlier it was reported that the Ukrainian border, Saakashvili crossed the region from Poland.