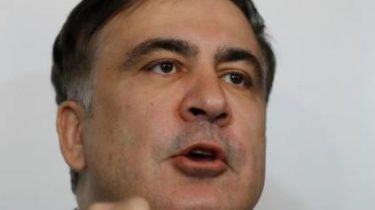 Former President of Georgia, former head of the Odessa regional state administration, the leader of the party “Movement of new forces” Mikheil Saakashvili says that during the deportation to Poland he was threatened and used physical force to him.

He stated this during a briefing from Warsaw.

“I have a lot of bruises. After yesterday I have a very sore neck, because they strongly I choked the whole way. So, I’ve gone neck and neck the Ukrainian oligarchy together with the Ukrainian people we turn”, he stressed, calling names Akhmetov, Poroshenko, Yuriy Lutsenko and Avakov.

According to Saakashvili, he was expelled from Ukraine in a private jet, but before that was put on the helicopter.

“It was a private plane, I don’t know who it belongs to. It could rent. There was the so-called passenger, i.e. the person who rented it, it was the representative of the huckster because he kept silent and watched me. But technically it was designed for it, not me. They are all the time engaged in a dialogue with Poland about my deportation. And Poland have answered very rightly, that if I agree technically, if all the procedures were civil, and if everything was done according to the human rights, they would take me. They had no coordination, they threatened me. At first I was put on the helicopter, I thought that I was abroad the helicopter to carry. I didn’t think they still use the plane. But the helicopter was to find a way to avoid people who might block the road or something,” he said.

Besides, Saakashvili complained that he was constantly threatened in a way.

“They all speak only in Russian, all these banderlog…They admire Putin, and they have every word, mate. And when they told me that now we are going to shoot you, I said, “Shoot what?”It was the troops of Yanukovych. They dispersed the Maidan. Now they use the gangster Avakov, Poroshenko for his gang plans. They should be disbanded”, – he stressed.

Separately, the politician also noted that in Poland he met members of the Polish Sejm.

“They arrived very quickly”, – he said.