In the Donbass were injured, three Ukrainian soldiers. Chronicle of the ATO 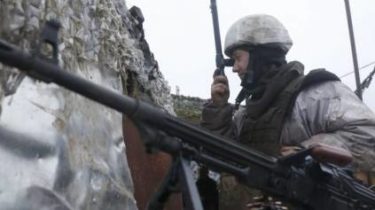 For 14 Feb in the area of ATO in the Donbas militants five times arrows at positions of the Ukrainian army wounded three soldiers.

In particular, on the Lugansk direction militants have used 120 mm mortars near Trinity and released in the area four mines. From grenade launchers and small arms fired at the Ukrainian positions near Travneve.

On the Donetsk direction militants from rocket-propelled grenades of various types, heavy machine guns and small arms fired at the strong points of the Armed forces of Ukraine near Krasnogorovka, Novotroitsk and Heater. Near Krasnogorovka also shot from APCS.

Meanwhile the Ukrainian military in the Donbass distribute leaflets with an appeal “sotrudnychaet with Dill Karate!”.