Language issue. The head of the Hungarian foreign Ministry has called the conditions of unblocking of the meeting of the Ukraine-NATO 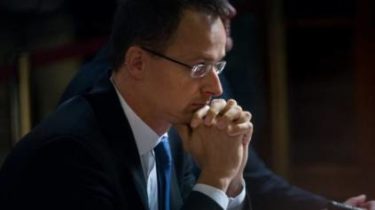 On 14 and 15 February was held the meeting in the format of defense Ministers of Ukraine and countries-members of NATO. However, it was canceled because their conduct have imposed a veto Hungary. And all because of the language issues in the new Ukrainian law “About education”. Budapest sees in the standards document discrimination against Hungarian and other national minorities in Ukraine.

The Minister of foreign Affairs of Hungary Peter Siarto noted that Ukraine to demand legal guarantees of the rights of Hungarians, and also to suspend the operation of the act. This is the website of the Hungarian government.

“Hungary will not abandon its current policy in relation to the law “On education” in Ukraine without legal safeguards. If Hungary has not used its veto in international organizations, she would have refused a single tool, which can protect the Transcarpathian Hungarians and to force Ukraine to meet international standards,” – said Siyyarto.

The Minister requires the approval of “every detail” in the Ukrainian law. Only after that Hungary will unlock the meetings of the NATO-Ukraine.

“To ensure that Hungary withdrew its veto, Ukraine, according to the expectations of the Venice Commission and the European Union, should refrain from implementing the law until they come to agreement on every detail of the legislation with national minorities, including the Hungarian minority. If the Ukrainian government will suspend the enforcement of the act until the consultation is over, it will be a good basis for negotiations with the search for a promising solution to the situation”, – said the foreign Minister of Hungary.

We will remind, earlier the Deputy Minister of foreign Affairs of Ukraine Vasily Bodnar stated that as a result of lengthy negotiations Ukraine and Hungary have agreed on the key points on ways of resolving the “language issue”.

According to the law “On education”, which President Petro Poroshenko signed in September, the only language of instruction in Ukraine is Ukrainian. This decision sparked outrage from some countries. In particular Romania and Hungary harshly he was criticized considering that it violates the rights of national minorities in Ukraine. Subsequently, the Ministry of education explained that the training will take place in two languages, gradually increasing the percentage of Ukrainian in high school.