The conversation of Poroshenko with Putin, forecasts of U.S. intelligence in Ukraine: 5 things that you could sleep 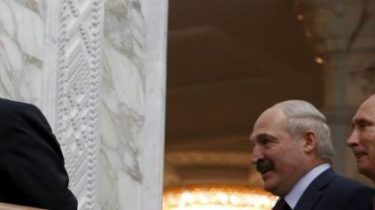 1. On Tuesday it became known about a telephone conversation between the presidents of Ukraine Petro Poroshenko and Russia Vladimir Putin. The interview took place on February 12, but on the official website of the head of state about it no mention. A source in the PA said that the conversation was long and was held at the initiative of the Ukrainian side. The reason for it was the third anniversary of the conclusion of the second of the Minsk agreements. Read more>–

2. During a training session in Turkey football club “Karpaty” was found honorary President of FC Petro Dyminsky. In Ukraine, where he had gone at the end of last summer, he is wanted – he is suspected in committing the accident, which killed a woman. Read more>–

3. In the Czech Republic don’t know anything about “business” of the mayor of Odessa Gennady Trukhanov, in which he went immediately after his release from a long vacation. 12 Feb Trukhanov allegedly went to Prague “to conduct the business negotiations at the level of the Ministry of industry and trade of the Czech Republic.” So on the website of the Odessa city Council explained the goal of “travel” of the mayor. Read more>–

4. The high Council of justice dismissed judge Podolsky district court of Kyiv, Natalia Neganova. It’s guilty that she broke the law during the consideration of the petition for arrest of the activist of Euromaidan during the events of November 2013 – February 2014. Read more>–

5. Director of national intelligence Dan Coates introduced in the Senate report entitled “assessment of the global threats the intelligence services of the United States”. In it, in particular, stating that Ukraine could be held a special election due to public discontent power. Also intelligence predicts that the conflict in the Donbas in 2018 will continue in its current form.