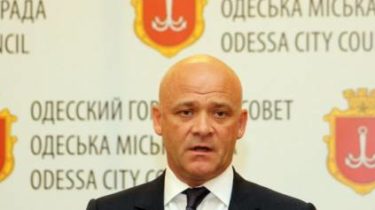 Prosecutors will seek the appointment of the mayor of Odessa Gennady Trukhanov who declared suspicion in a corruption case, 50 million hryvnia Deposit.

This was during the briefing said the head of the Specialized anti-corruption prosecutors Nazar Golodnitsky.

“The Prosecutor’s office will petition for election of a measure of restraint – detention with a bail of 50 million hryvnia for the Odessa mayor, 30 million for his Deputy and 10 million every other member of this scheme”, – he stressed.

According to Golodnitsky, just the production was announced on 8 suspicions, six people were detained, the whereabouts of two more is installed.

“Of these five people is the officials of the Odessa city Council, two executives and founders of private enterprises were involved, according to the investigation, in this scheme, the evaluator who did the evaluation of these areas”,- said the head of SAP.

He also expressed the hope that proceedings against Trukhanov will consider today, February 14, in the Solomensky court of Kiev.

Remind, the mayor of Odessa Gennady Trukhanov who declared suspicion in a corruption case, today, February 14, in the morning he returned from abroad to Ukraine. The official arrived by plane from Warsaw to the airport “Borispol”. There he was detained by the guards, who then gave Trukhanov employees of the National anticorruption Bureau of Ukraine.

Later in the NEB confirmed that February 14, at the Boryspil airport NABOO detectives and prosecutors SAP in accordance with article 208 of the criminal procedure code of Ukraine detained in Odessa the mayor and his Deputy suspected of committing a crime under part 5 of article 191 UK of Ukraine (“Acquisition of property by abuse of official position”).

The municipality, according to detectives acquired the administrative building of the former factory “region” – at an inflated price 185 000 000 UAH. Coincidentally, six months before the building was worth only UAH 11000000. The NAB had arrested the accounts to which the Odessites transferred the money.

Now with all the suspects are investigative and procedural actions, as well as the question on election of a preventive measure.