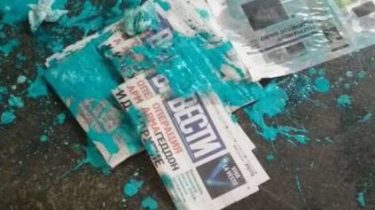 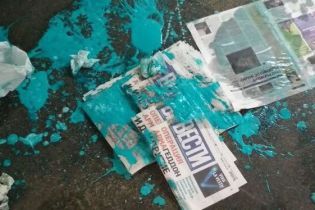 In the center of Kiev in the transition the metro station “Sports Palace” is unknown poured a bright blue paint the girl-promoter, who was handing out the newspaper “Vesti”.

This was reported by eyewitnesses on the page “Operational Kiev” in Facebook.

“Just (about 9 o’clock in the morning – approx.ed.) to the metro station “Sports Palace” unknown poured paint over the newspaper and the girl who was handing out them”, – stated in the message.

As noted, after that, the bully fled the scene.

Just at the metro station Sports Palace unknown poured paint over the newspaper and the girl that they were handing out, and then disappeared.

In turn, the edition of “Vesti” said that just 10 minutes later, a similar incident occurred near the metro station “Lev Tolstoy Square”.

We will remind, earlier the staff of the National Agency of Ukraine on the identification, investigation and management of assets derived from corruption and other crimes once again tried to take control of the assets in the office center GULLIVER, in a room which is a revision of the publication “Vesti”. However employees of the newspaper closed the blinds in the office and not let the agents.

In ARMA noted that such actions constitute an offence and violators may incur both administrative and criminal liability.