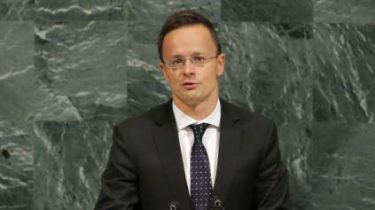 Ukraine did not invite representatives of the Hungarian national minority for consultation on the introduction of the law on education in language learning. This was stated by Minister of foreign Affairs of Hungary Peter Siyyarto, reports UNIAN.

According to the official, Ukraine “started an international campaign of lies against Hungary and the Transcarpathian Hungarians”. Because of this, according to him, Transcarpathian Hungarians have ignored a meeting with representatives of the Ukrainian government, during which talks were held regarding educational law and its conformity with the requirements of the Venice Commission. The diplomat said that official Kiev wanted to put the Hungarians before the adoption of the law, and not to hear their views and to adjust the provisions of the document according to it. The law itself Szijjártó called that “in a rude manner contrary to international law and the rights of Transcarpathian Hungarians and the European Union and the Venice Commission has asked Ukraine to change “.

As reported, on 14 and 15 February was held the meeting in the format of defense Ministers of Ukraine and countries-members of NATO. However, it was canceled because their conduct have imposed a veto Hungary through the language issues in the new Ukrainian law “About education”. Budapest sees in the standards document discrimination against Hungarian and other national minorities in Ukraine. The Minister of foreign Affairs of Hungary Peter Siarto noted that Ukraine to demand legal guarantees of the rights of Hungarians, and also to suspend the operation of the act. In response, officials extended the transition period for the introduction of the “language” of articles of the law On education for ethnic minorities. Now the children of the national minorities and their parents will have more time for the transition to the new rules of teaching. The transition period will last until 2023. “We will always proceed from the rights of national minorities in the country, but always the number one priority will be the development of the Ukrainian language, culture,” – said the Prime Minister Volodymyr Groysman.

Between Ukraine and Hungary, a new scandal is brewing

However, this did not satisfy the Hungarian side, and representatives of national minorities ignored the invitation to dialogue. Foreign Minister Pavlo Klimkin responded with a message on Twitter. “Some “metamorphosis” – the Hungarians that require consultation, then they themselves refuse to try. Reading the opinion of the Venice Commission, the Hungarians seem to confuse Hungarian with Russian – like languages are different, and I hope the approaches will be different,” – said in a statement.