Evil is in the Kremlin. Started Russia’s hybrid war becomes a world – Poroshenko 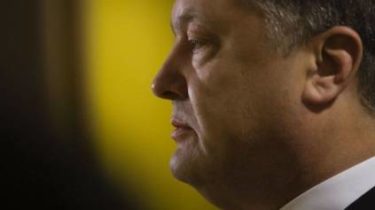 Hybrid war in Ukraine unleashed by the Russian Federation, gradually affects other countries.

This was during the 54th Munich security conference, said President of Ukraine Petro Poroshenko.

“Today we have no choice but to admit that the hybrid war waged by Russia, gradually turning into a full-scale global hybrid war. The Kremlin knows no bounds in their hidden intentions. There is no country that would be so familiar with hybrid tactics of Moscow as Ukraine. That is why I urge the whole world is in our interest to confront Russia’s attempts to destroy our unity and destroy our democracy.This war is being waged on different levels and on different fronts and at different speeds. This war has involved many different actors, who may not even realize their destructive roles. However, the evil that is behind this war, is the only one and it is in the Kremlin”, – said Poroshenko.

In Munich the President of Ukraine has brought with Donbass flag of the EU.

“The flag of the European Union, I was brought to Munich from the contact line in the Donbas. This flag is a demonstration that the question of Donbass concerns not only Ukraine. This flag is about all of us who want to live in Europe, where there is peace, security and stability”, – stressed the head of state. 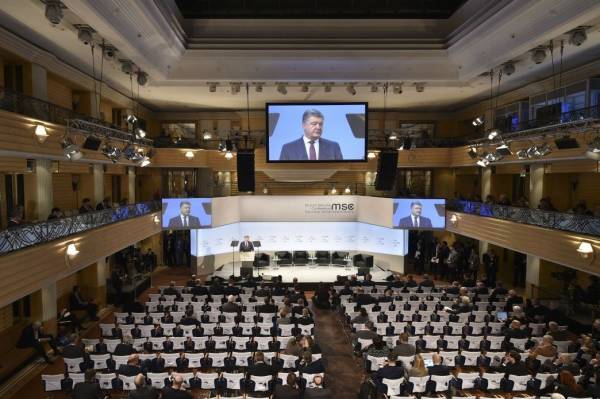 Poroshenko noted that “sanctions are working. Now the only message to Moscow should be that price will continue to rise until, until Russian troops leave Donbas and Crimea. If someone still thinks that sanctions are ineffective, then we will strengthen them by introducing new and closing loopholes”.

He is convinced that “improving the defense potential of Ukraine will increase the price of Russian aggression. Knowing about the strong resistance, Moscow will think twice whether to start a new offensive.”

The President of Ukraine appealed to the international community:

“I urge the international community to defend the truth. At home and in the international arena. Through the improvement of the national legislation and through better coordination between us to counter the Russian propaganda and fake. I appeal to our international partners for supporting us, use the opportunity to build more than order in Europe. Protecting Ukraine, you are defending its sovereignty, territorial integrity and independence.”

Poroshenko reminded that the world is not take seriously a decade ago, threatening statements by the Russian President Vladimir Putin.

“Let us recognize that we did not take seriously, when in 2007, in Munich the Russian President declared his war against the civilized world. Russian aggression against Ukraine in 2014 was the most serious and cynical attack on democratic values and an international order based on rules. It was well planned in advance. And when this plan began to be implemented, it involves a lot of agents,” – said the head of state.

He recalled the marginal far-right and ultra-left parties, which for many years have supported Russia in the world.

“Look at the army of “trolls” and advocates that penetrate into our homes, not recognizing no boundaries, no moral principles and no rules. Look at the fake news, which distort reality and mislead our society. View on migration flows, especially in the countries of the European Union, which should destabilize and undermine it from within. Look at cyber attacks are not only aimed at the election campaign, but also to our critical infrastructure,” the President said.

He noted that “opposition to Russian aggression is an existential challenge that will affect our future. Whether it’s the “Russian world with alternative values”, or “the free world with universal values”? First, You need to understand what the “Russian world”. There are many examples. Just compare the standard of living in the former Koenigsberg with life in Munich. Or the territory of Karelia, which Russia annexed 80 years ago, with Finnish Karelia. Or Kuril Islands, which Moscow seized after the Second World war, with Japan. The difference between the “Russian world”and the Free World is amazing. “Russian world” turns everything it touches is in ruins and decay. Look at Abkhazia, South Ossetia, Transnistria, the occupied Donbas and Crimea. It seems that in accordance with the “Russian world” doctrine, all of Europe would look like Kaliningrad or the occupied Donetsk, and not Vice versa”.

The President also noted the need to get rid of illusions – appeasing the aggressor only begets further aggression.

“Compromised values and principles quickly transformirovalsya in even more aggression. Strange as it may sound to someone, but today Ukraine is the main field of battle for the European order and security architecture. In fact, Ukraine is the sword and shield of Europe,” the President said.

Poroshenko urged to support the strengthening of Ukraine’s defense.

“We do not claim the territory of our neighbor, but defend their land. Strengthened defense capability of Ukraine will increase the price of Russian aggression. In the face of such a strong deterrent, Moscow will think twice before to start a new offensive. I last but not least – keep the door open for Ukraine or the EU or NATO,” – said the head of state.

He noted that the greatest achievements in the field of security come from the expansion and transformation, not from the retreat and preservation of the status quo.

Note that in Munich held a bilateral meeting of Ministers of foreign Affairs of Ukraine Pavlo Klimkin and Russia Sergey Lavrov. Talked about the situation in the Donbas. But so no what to do. 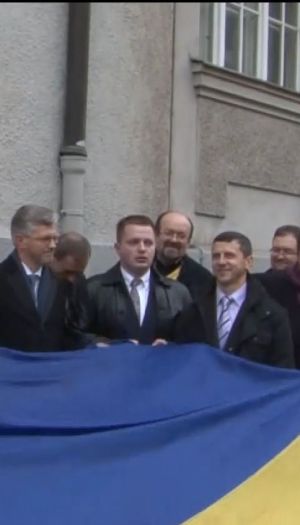