Representatives C14 broke into the building of Rossotrudnichestvo in Kiev 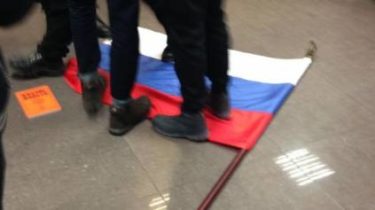 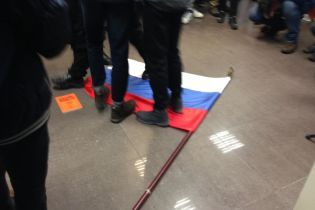 Representatives of the Ukrainian nationalist organization C14, “Right sector”, “Tradition and order” went to the Russian center of culture and science in Kiev.

About it reports a press-service of C14 in Facebook.

“Activists C14, PS, Tradition and order and other nationalist organizations came to the “Rossotrudnichestvo”. Revealed interesting “Souvenirs”, – stated in the message.

Under the “Souvenirs” refers to the flag of the Russian Federation and other symbols of Russia.

Activists note that the establishment of Rossotrudnichestvo in Kiev is illegal, and before it contributed to the activities of Pro-Russian organizations, representatives of Russian Cossacks, took part in organizacii camps “Young scout” and others. Radicals have painted the walls reading “Down with the FSB”, “Freedom Sentsov” and the like.

Out of the FSB

The employee of management of the centre denies involvement in such activities, insisting that the centre is engaged in purely cultural activities.

Now the action is completed, the flag of the Russian Federation activists burned.

In Kiev protested against the “National teams”

The campaign ended. “Souvenir” was destroyed. The FSB did not place in Ukraine.

We will remind, in January, the activists of right-wing organizations C14 with banners “Down with the FSB” staged a rally near the Kiev-Pechersk Lavra, blocking the entry into its territory. To him came the Abbot of the monastery Paul.