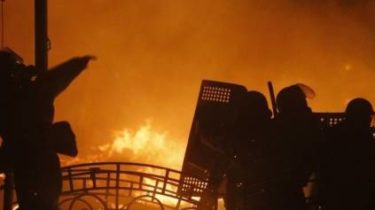 18 Feb 2014 the then President of Ukraine Viktor Yanukovych finally decided to drown in blood the entire Maidan, starting the “antiterrorist operation”, where instead of the terrorists were the people of Ukraine patriots, who didn’t want their wholesale sold the Russian Empire, and sought to live in a free, democratic, European country.

This was stated by Secretary of national security Council of Ukraine Oleksandr Turchynov on the occasion of the anniversary of the events of the revolution of Dignity (18-20 Feb 2014).

“Four years ago, the power of the puppet of the Kremlin, Yanukovych crossed the Rubicon. Since January 2014, security forces, together with the usual criminals began to kidnap, torture and kill defenders of the Maidan. On the morning of 18 February, at the College and in Mariinsky Park authority has begun to use weapons against a peaceful March of protesters”, – he stressed.

As noted Turchinov, the evening of the same day, after the so-called Ultimatum, began a large-scale assault on the Maidan.

“The circle of fire to protect us from armed attackers, was shrinking every hour. Burned trade Unions Building, which housed the Headquarters of the resistance. I remember the moment when even on stage could be felt on the face the heat from the flames that blazed around,” – said the NSDC Secretary.

According to Turchynov, 18 th February, died 26 patriots, over 250 were seriously injured.

“At night around the stage was quite a small area of liberty, but we survived then. And that was the beginning of the destruction of the regime of Russian puppets. Then there was the heroic breakthrough on 20 February. When unarmed people with sticks, construction helmets and plywood shields, went forth against machine guns and machine guns… So the fall of the regime of Yanukovych, won the Revolution of Dignity! The heroes of the Heavenly hundred heroes who have gone on, have become our glory, writing with their blood the history of victories of our country! Eternal memory and glory to the Heroes who gave their lives for our freedom and independence! We are responsible to them for the fate and future of our country! God is with us, truth is with us, we have victory!” he said.

the press service of the NSDC