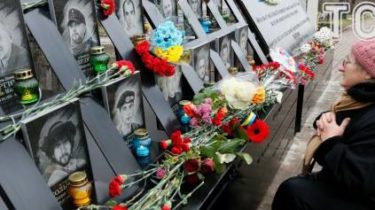 In Kiev in the Alley of Heroes Heavenly Hundreds on Sunday, February 18, in the morning we held a prayer service in memory of the dead participants of the revolution of Dignity.

To honor the memory of the heroes came dozens of people: relatives of the victims, the events of the revolution of Dignity and simply not indifferent people of Kiev.

“We owe it to all the heroes continue to fight for independent and free Ukraine, for which they died and you wanted to see,” said the son of Heavenly Hundred hero Volodymyr Bondarchuk.

People sang the anthem of Ukraine and chanted slogans “Glory to Ukraine!” and “Heroes never die”.