Suicide foreign students in Kiev: the leadership of the medical University suspended the Deputy Dean 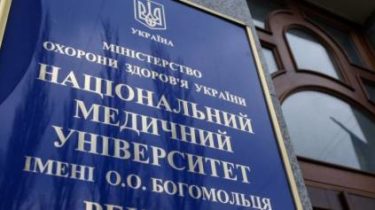 The management of the National medical University Bogomolets was removed from the duties of the Deputy Dean for work with foreign students Tatiana Timohina at the time of the investigation of the disappearance and probable suicide of the student.

This was reported in the administration of the University.

“The leadership of the NMU named after O. O. Bogomolets was removed from the duties of the Deputy Dean for work with foreign students Tatiana Timohina during the investigation of the situation with the missing student at NMU. The statement of the Deputy Dean Timokhina T. A. regarding the removal satisfied”, – stated in the message.

As noted, the corresponding order was signed on 19 February in connection with the investigation of the circumstances of the disappearance of a student Mukaddas Nasyrlaev. The University said that now there is an internal service check.

Recall that a student jumped from the bridge Paton in Kiev. Now her body is looking for lifeguards. The head of the Turkmen Diaspora of Rovshanbek Rozmetov said that the Paton bridge jumped a student of National medical University O. O. Bohomolets Mukaddas Nasyrlaev. According to him, the student was a straight a student, but due to the fact that the Dean’s office are not filed on time documents to the Migration service, the girl had problems with registration of residence permit in Ukraine.

The Prosecutor’s office of Kiev opened criminal proceedings on the fact of suicide of a student from Turkmenistan.