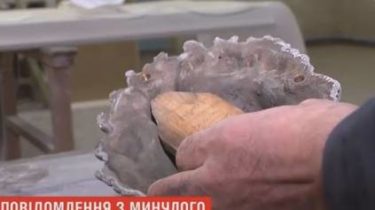 The message that was waiting for reading 118 years found in the National art Museum. There removed the front door for restoration. And when pulled down to the details, the bronze face of a lion on wooden plank and noticed a note, says TSN.16.45.

The door 118 years . They opened and closed millions of times, they are not just restored, but no one knew that here to keep the secret, modern masters called her a Text from the past.

Doors began to prepare for the restoration, disassemble them into parts, under one of the parts, which was founded in 1900 and found the same message written with a pencil.

“June 25, 1900 joiner semen Antonov, son Alex, there’s a note , Jacob black labourers. This is the message which we have received through 118 years,” – say in the Museum.

On the other hand the plate is almost completely darkened. From this side, the joiners saw nothing, but the chief engineer of the Museum is fascinating.

“Found word Gorodetsky. Possible inscription by the hand of Gorodetsky,” says the engineer.

When I went through the door to the details to start the work, under the bronze face of a lion on wooden plank and noticed a note. Her usual pencil were written the names of the joiners who, most likely, were making doors. Upon completion of the restoration modern masters, too, will leave their names in one of the lions to a hundred years appreciated their work colleagues. 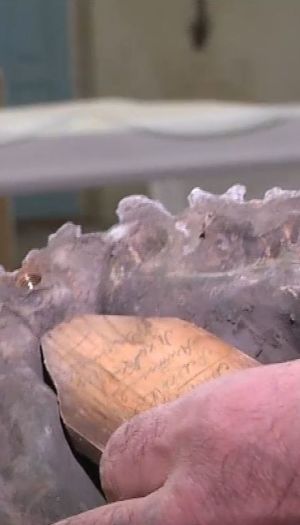 On the bad side and looked under the microscope and really read the two words “architect Gorodetsky”.

Further, the initials and signature, but whether he personally Gorodok will explore the restorers. But most likely he doesn’t just take work at the carpenters, but he did the drawings.

“He’s very detailed approach to construction, each element of”, – noted in the Museum.

In the Sophia of Kyiv announced a sensational discovery, to say nothing of Hetman Mazepa

Architect Vladislav Vladislavovich Gorodetzky this building was purposefully designed for the first in the Kiev Museum. In 1899 it was a Grand event for the capital. The photo of the time you can see the original appearance of the doors. After the Second world war they were painted grey and used a lot of carved details.

Nina joiners remove layers of old paint. Some of the doors in such a terrible state that they can only be replaced by a new one. Upon completion of the restoration modern masters, too, will leave their names in one of the lions to a hundred years appreciated their work colleagues.

Renovated doors at its location back somewhere in April. They will not be grey, but will the natural colors of wood, such as intended by the architect Gorodetsky.