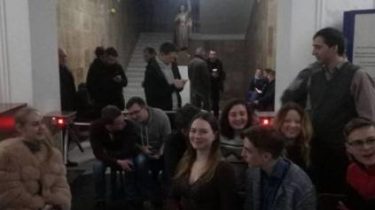 In Kiev, dozens of students of the National medical University. Bogomolets blocked the entrance to the administration to not allow the work assigned by the Ministry of health of the temporary acting rector, head of Department of surgery no 1 in NMU Michael Saharsa.

According to students, they do not agree with the Ministry of health’s decision to dismiss the rector Catherine Amos from performing their duties during the work of the Commission to deal with the situation on carrying out of the licensed exam KROK, writes “UKRINFORM”.

In turn Zakharash and representatives of the Ministry of health called the police, which amounted to administrative Protocol.

“The rector does not comply with the order of Ministry of health, who received, respectively, caused by law enforcement, a Protocol”, – said the Deputy Minister of health Alexander Lynch.

At the same time he Zakharash explained that agreed temporarily to perform the duties of the rector, to ensure the work of the Commission on the issue of assessment of students.

“We can’t get to my workstation about 12 hours. On the place there was nobody from the leadership, we the guards forbade to go, and then students blocked the entrance… to Solve this problem is necessary, because in the future students will not be able to pass the exams. I was asked for the Commission to help in solving this problem,” he said.

For the failure of the licensing exam of the Ministry of health temporarily suspended from the duties of rector of NMU. Bogomolets Catherine of Amoz, and created a Commission to study the situation.