In Kiev was renamed the Moscow bridge 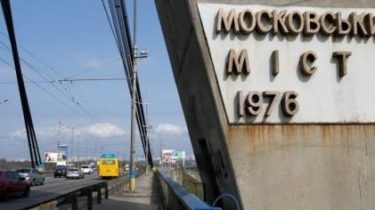 Kyiv city Council has renamed the capital Moscow bridge in the North.

For a decision voted 82 of the 89 members of the city Council.

“The goal of the decision – the return of the Moscow bridge in Kiev the project name “North.” The address of the Deputy of the Kyiv city Council, Victoria Flies had the initiative. Passed approval of the Commission on names,” – said Deputy Chairman of Kyiv city state administration Alexey Reznikov.

In addition, the deputies have renamed the square of Andrey Ivanov (between the street Mikhail Emelyanovich-Pavlenko and Batysheva lane) in square “Latvian”, the Park of Friendship of peoples in the Park “Muromets” – the name of the island where it is located, and also gave the square bounded by streets zhilyans’ka, Velyka Vasylkivska and Physical education in the Shevchenko district, the name “Trinity”, the square between the streets of suburban area, and Tarasovskaya street is the name of Dimitar Peshev, and Park on the street Sich Riflemen, 27 – the name “Canadian”.

Deputies also “denomonational” the street name of a French Communist, Henri Barbusse, renaming it in honor of the outstanding Ukrainian military leader Vasily Tyutyunnik, street Kirovograd is in honor of the hero of the ATO Vladimir Brozhky, who was killed in the East of Ukraine, and the street Wanda Wasilewska – in honor of the Ukrainian economist, Professor and benefactor Bohdan Hawrylyshyn, who died in October 2016.

Earlier, the Kyiv city Council renamed the metro station “Petrivka” in “pochayna”. Besides the new name given to “Kurenivsko-Chervonoarmiiska” (blue) line of the Moscow subway – “Obolon-Teremkovskaya”.