“Little green men” and raked car. Poroshenko told about the events in the Crimea and the Donbas in 2014 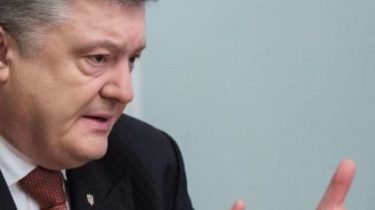 At this moment in the Obolon court of Kyiv is the questioning of the President of Ukraine Petro Poroshenko in the case of treason, the former head of state and the fugitive Viktor Yanukovych. Before questioning the parties showed a video of the visit Poroshenko in Crimea on 28 February 2014, when the Peninsula was overrun by “little green men” (as he called them injured), followed by its annexation by Russia.

Four years ago in the Crimea, Poroshenko went as the people’s Deputy of Ukraine. About it writes “Ukrainian truth”. For review of this video (evidence) before questioning the President requested the prosecution.

The Prosecutor noted that the record shows that on 28 February 2014, Poroshenko personally arrived in the Crimea without protection, to resolve the conflict, which is incited then on the Peninsula of Russia.

On the video, which was filmed by one of the local TV channels, Poroshenko said the Russian language the journalists that came to speak with deputies of the Supreme Council of Crimea and offer them the holding of a round table on the problems of the Peninsula.

“Colleagues, on our joint efforts depends on whether the in the Crimea the world. I came to this world to find. We need to find this compromise,” – said the politician.

Behind the scenes, the reporter noted that while Poroshenko did not manage to get to the deputies. In the end, he got into a taxi and left.

During the actual interview, Poroshenko confirmed everything that was in the video.

The first question prosecutors were on the visit to the Crimea. According to him, the reason of the visit was to attempt the Declaration of an illegal referendum in Crimea.

Poroshenko to get to the Crimea, was ready to obstruction by the military of the Russian Federation, arrived in Simferopol airport. I remembered about the fight, but unknown who he was prevented to go to the media, afraid to go on camera because they hide their faces.

Poroshenko recalled the proposals of the Crimean authorities to prevent the spread of separatist sentiment in the Peninsula. He agreed to meet with the Chairman of the Parliament of the Crimea Konstantinov. Poroshenko arrived to the room, which was about 300-400 meters from the Crimean Parliament. On this day, the Crimean Parliament did not work. The building was surrounded by Russian soldiers and the fighters of the “Crimean”. They were coordinated by Russian officers. The President noted that the Parliament has not adopted that day, no decisions. Therefore, it was decided “to apply measures of physical influence”.

The head of state remembered the threats from the agents provocateurs, but some people began to defend him. He thanked the people who defended him. Several policemen didn’t allow the crowd to cause damage. Poroshenko returned from Parliament in a taxi to your meeting.

Poroshenko after the Crimea moved to Eastern Ukraine, where Russia started the aggression. He remembered his visit to Luhansk in April 2014. Then was supposed to be meeting with teachers and University professors. Then he decided to visit the state border of Ukraine. In particular, Izvarino. Machine Poroshenko was then fired. During a meeting with people in Izvarino was a provocation of people who crossed the border. Petro Poroshenko thanked the local resident for demanding to stop provocations. Then law enforcement officers, according to the President, did not respond. Then they allegedly took direction from the Russian.

Poroshenko believes that all the protests in the cities of the southern and Eastern regions of Ukraine were coordinated from Russia. He insists that the then government of Crimea had no authority to announce the holding of a referendum. Haste action regarding determining the date of “voting” indicates the instructions from Moscow.

According to the head of state, Russia is well-planned special operation in the Crimea. This and the actions of the Kremlin and the Federation Council, and the Ministry of defense of the Russian Federation.

The Prosecutor asked about the appeal of the President Yanukovich to Putin about the introduction of troops on the territory of Ukraine. He interrupted his lawyer Yanukovych and insisted on the illegality. The judge decided to satisfy the petition of the defense.

Regarding the occupation of the Crimea, Poroshenko said that Russia had no right to Annex the Peninsula, because it is a violation of international law.

Poroshenko did not agree with the opinion of Yanukovych that the world has recognized the occupation of the Crimea in 2016. In his opinion, it was made once in 2014 when were accepted the relevant resolutions of the United Nations.

After that, Poroshenko raised the tone, responding to the fact that still not everyone is aware of the belonging of the Crimea and the so-called civil war. He insists on one thing: the Crimea belongs to Ukraine, and the Donbas is a war with Russia. The Kremlin has violated a number of international legal norms.