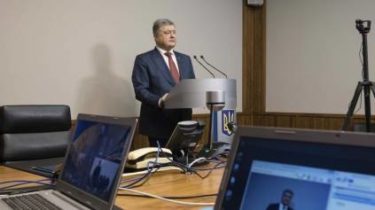 The cost of maintenance activities of the President of Petro Poroshenko and the President’s Administration amounted to 802 million 328 thousand hryvnias in 2017.

This is stated in the reply of the State administration at the request of the Agency Ukrainian news.

Poroshenko filed e-return: $ 26 million in the accounts, and countless companies

The largest expenditure for the activities of the President, the Administration and other subsidiary bodies (237,4 million) and for the functioning of the state aviation enterprise “Ukraine” to transport senior officials of the state and led by their official delegations (222.8 million hryvnia).

To 126,5 million cost provision of service road and water transport Poroshenko Administration, heads of other state bodies, in 81,2 million hryvnias maintenance of the state residences, the content of administrative objects.

34.3 million UAH was spent on the implementation of the trips Poroshenko, another 7 million on their training, 2.5 million of business trip of employees of the Administration and of public Affairs.

13.9 million hryvnias were spent for carrying out of official events with the participation of Poroshenko and 7.3 million – for transportation by the flights of the Chairman of the Verkhovna Rada Andrei Parubiy, the Prime Minister Volodymyr Groysman and they headed official delegations, 5,7 million UAH on the air in Ukraine delegations headed by Poroshenko.

On the project on arrangement of premises for representative offices of NATO in Ukraine was spent 12 million hryvnias for carrying out the representational activities – 10,3 million UAH.

The cost of the remaining articles of the programme to ensure that the activities of the President and the Administration was less than 5 million UAH.