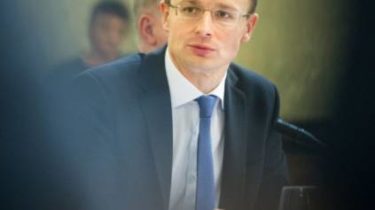 The Ministry of foreign Affairs of Hungary after the arson of the premises of the “Society of Hungarian culture of Transcarpathia” in Uzhgorod summoned the Ambassador of Ukraine Love Nepop for an explanation.

“An amazing process is happening in Ukraine, extremist political ideas grow”, – said the Minister of foreign Affairs of Hungary Peter Siyyarto, discussed the incident with one of the leaders of the Transcarpathian Hungarians Laszlo Brenzovich.

According to Szijjártó, it becomes clear by the laws, accepted by Verkhovna Rada, and that “severely limit the rights of minorities” and it seems that “intimidate the representatives of the Hungarian national minority in Transcarpathia”.

Also the head of the Hungarian foreign Ministry called this situation unacceptable and stressed that Ukraine “must be able to control the extremists,” if you are serious about rapprochement with the European Union and NATO.

We will remind, in Uzhgorod in the night of Tuesday, February 27, a fire occurred in the building of the Transcarpathian Union of Hungarianslocated on Orthodox embankment. Also in the same month, on the night of Sunday, February 4, unknown persons threw a bottle with an incendiary mix in a window of the building of the Transcarpathian Union of Hungarians. It subsequently emerged that the arson was the Polish citizens, members of radical right-wing organization “Falanga”.

The Ministry of foreign Affairs of Ukraine called the arson “Society of Hungarian culture of Transcarpathia” in Uzhgorod provocation aimed at inciting ethnic hatred.