“Putin is clearly sick.” Network exploded after the speech head of the Russian Federation on nuclear weapons 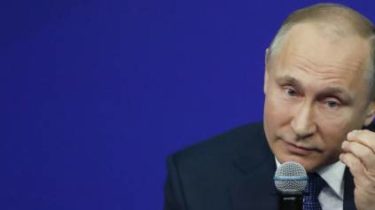 Russian President Vladimir Putin delivered a speech before the meeting of the Federal Assembly. He talked about the challenges now facing the country, international politics, medicine and the like. However, the greatest impression was the phrase about the development of new weapons and a public threat to the West with the hint that Russia is always ready to use nuclear weapons in response.

Such words could arouse different feelings: the fear, someone from the Russians – and the rise of patriotism. However, the Network speech generally and speech about nuclear weapons, in particular, is mainly caused a wave of jokes and ironic judgment.

Putin spoke about the presence of Russian hypersonic weapons

Putin’s Message To The Federal Assembly. – Forget about justice! About the people! Need to return them to medical help! And other…

Some drew attention to the health of the President of Russia. During the speech, Putin coughed, drank some liquid from a large Cup. Joking about the fact that because of the alleged probable disease in Russia was forbidden to show the film “Death of Stalin”.

Putin is clearly ill. Watch the message to the Federal Assembly. All the time, coughs, and drinks something out of liter plastic Cup. Of course, what they “Stalin’s Death” was never shown.

Interested users of social networks and health, other representatives of the Russian policy. So, the photo, which shows the ideological enemies of Vladimir Zhirinovsky and Gennady Zyuganov, who are the leaders of the liberal and Communist parties respectively, signed the word “hospice” (that is, an institution for the terminally ill).

Dream users and liquid to drink Putin. Whether hoping, or just laughing, in one of the photos of the Russian President compared with the Croatian General during the Yugoslavia Slobodan praljak began to present who recently drank the poison at the court in the Hague.

A huge number of publications devoted to the words of Putin on the development of new weapons, threat of nuclear weapons to the West. The head of Russia said that his country has one of the largest nuclear potentials and is ready to strike back at the slightest attack on Russia or the allies.

For those too lazy to read the results of Putin’s message to the Federal Assembly in one picture pic.twitter.com/Rv6uD83Gjf

In Nevada was seen secret Russian tank. Judging by the sound, equipped with a hypersonic weapon pic.twitter.com/JtiN4mjjwt

After these words, the audience stood up and applauded (with)

Yes, people who have children study and live in the West, the people who make most of their money stored in other countries. Yes, they will take abnout for the West.

Quilted jackets, what are you gullible fuck( pic.twitter.com/InJoMrOFUX

Linked this emotion with Putin and the recent scandal with the Argentine cocaine, which was supposed to deliver it to Moscow.

Putin said he was ready to supply gas through Ukraine, if she will prove the benefits

Other jokes touched those present at the meeting of politicians. Some of them had the appearance of a completely disinterested person who would rather do their business.

*I wonder if I got far enough before to notice me?* pic.twitter.com/V76f7S6aG1