Yanukovych told how, on the basis of the Treaty of friendship asked Putin to send troops to Ukraine 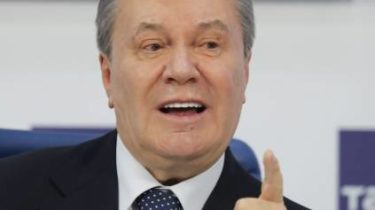 The former President of Ukraine and the fugitive Viktor Yanukovych told the next version four years ago, he wrote an appeal to Russian President Vladimir Putin about the introduction of troops in Ukraine. This document actually freed the hands of Moscow, which sent in an army of “green men” in Crimea and then annexed.

“The address was written on March 1, 2014 in Rostov in the first half of the day. We sent it with my application, which Churkin (former permanent representative of the Russian Federation in the UN security Council Vitaly Churkin, died) published on behalf of the Russian foreign Ministry on the UN security Council. I sent this appeal to the foreign Ministry,” said today, March 2, Yanukovych during the press conference.

He noted that he wrote the appeal himself.

“I myself was. With me was enough people. We deliberated for a long time, because it was necessary to find how to correct stance and why. We have the main reason was the Treaty of friendship and cooperation between Ukraine and Russia. It is at the heart of this appeal. The statement was actually application. By the way, before this appeal was that two of them”, – said Yanukovych.

Before Yanukovych was doing just the other statements with regard to the letter to Putin:

“The document was not put into effect. The document really was. It was an emotional decision somehow affect the offensive of illegal armed groups, the violence of people in the Donbas. The looting that was, it gave me emotions and the desire to protect people.”

Today Yanukovych also said that before the appeal March 1, 2014 in February of the same year, asked Putin to enter to Ukraine, “police peacekeepers”.

The text of the statement of Yanukovych from 1 March 2014 the following was stated: “As the legally elected President of Ukraine declare that events on the Maidan, illegal seizure of power in Kiev led to the fact that Ukraine was on the verge of civil war. In the country there is chaos and anarchy. The lives and safety of people, especially in the Southeast and in the Crimea, under threat. Under the influence of Western countries by open terror and violence. People are persecuted on political and language grounds. In this regard, I appeal to the President of Russia Vladimir Putin with the request to use the armed forces of the Russian Federation to restore legality, peace, law and order, stability and protection of the population of Ukraine”.

Copy of this letter the U.S. has provided Ukraine – a case of treason Yanukovych.

“The investigation of the military Prosecutor of irrefutable documentary evidence of the treason of Yanukovych,” – said before the Prosecutor General Yury Lutsenko about this treatment.

As Russia is telling the world lies about the appeal of Yanukovych to Putin, read on Dnia this link.