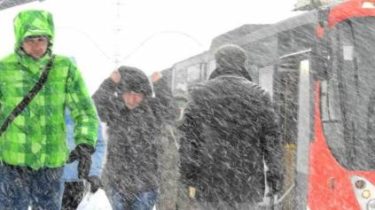 In Kiev because of bad weather entered the operational situation on the routes of public transport.

About it reported in a press-service of the municipal enterprise “Kyivpastrans”.

“From the beginning of the movement of March 3, entered the operational position No. 2 – following a deviation from the timetables for all public transport routes in connection with difficult weather conditions”, – is spoken in the message.

Due to the bad weather also was suspended the movement of buses on route 258 “metro station “Forest” – Northern cemetery”.

Kiev will again sweep the snow. How to protect yourself from injuries during ice

Besides, from-for break of a heating system “Kyivenergo” in the city center, on the street Simon Petlyura was amended in bus route No. 114.

Separately it is reported that with 7:42 on the Grushevsky street near the Parliament, the protesters blocked the traffic.

“The operation of buses of routes № 62, № 24 was organized to the metro station “Arsenalnaya” and the stadium “Dinamo” – said in “Kyivpastrans”.

We will remind, on Saturday morning, March 3, under the Rada clashes between police and protesters. During the clashes of protesters set fire to tires. Reported wounded on both sides. The police detained all the activistswho were in the camp under the Verkhovna Rada and carrying out investigative actions.