“The drive of extremists, weapons and explosives taboo”. Lutsenko reacted to the clashes near the Parliament 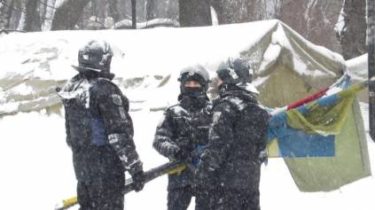 In a tent camp near the Parliament for money of the fluent oligarch Sergey Kurchenko was preparing an armed seizure of the Parliament.

This was announced on his page on Facebook, the Prosecutor General of Ukraine Yuriy Lutsenko.

“Camp, where the money Kurchenko plans of capture of the Parliament, which regularly attacks start, including with the use of weapons by employees of the interior Ministry, must be stopped”, – he stressed.

According to Lutsenko, it is the first day of the “stock” Saakashvili’s declared guarantee to peaceful protest.

“Despite the fact that since then the police seized from individuals associated with these shares, a bunch of weapons and explosives that some activists of the shares detained on suspicion of kidnapping, others on suspicion of the murder of an entire family of farmers, we further guarantee the people’s right to protest. Anytime, anywhere,” added the Prosecutor General.

At the same time, the head of the GPU was assured that to turn campgrounds near Central authorities in “the drive of extremists, weapons and explosives taboo”.

“Therefore the GPU supports the legitimate actions of the interior Ministry on 3 March, in the camp. At the same time, prosecutors are closely monitoring the legality of actions of law enforcement officers towards the detainees. Peaceful protests – Yes. Paid from abroad, no to extremism”, – summed up Lutsenko.

From the first day of stock Saakashvili, I, as attorney General, declared guarantee to peaceful protest. Despite the fact that …

Published by Yuriy Lutsenko on March 3, 2018

Recall that on the morning of 3 March, law enforcement officers carry out investigative actions near the Parliament by the court in criminal proceedings. One of them opened on the fact of attempt of capture of the International center of culture and arts (October Palace), the other for the collision on 27 February. The police said that the residents of the tent city resisted, so the police had to detain them.

Later it became known that on the territory of the tent camp , the police seized RGD-5 grenades, Molotov cocktails and smoke mines.