Six activists and four policemen were injured in clashes at Parliament 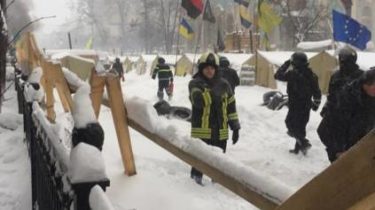 About this informed the head of state of Ukraine in Kyiv Andriy kryschenko in the air “112 Ukraine”.

Molotov cocktails and clashes with the police. Near the Parliament detained activists

“Now we have information about six individuals who came to the hospitals from among those that were in the camp. Injured four police officers, who got injuries”, – he said.

Now demolished tent camp near Parliament, security forces are. The area is bordered by red ribbon.

Meanwhile, the people’s Deputy Yegor Sobolev said that the police of Pechersk district 71 is arrested in the camp on Grushevsky street.

The police of Pechersk district – 71 detained in a tent camp on Hrushevskoho activist of the Movement “Liberation”. Need volunteers-lawyers. Who can go – let me know +380 63 833 6505

We will remind, in the morning of 3 March, law enforcement officers carry out investigative actions near the Parliament by the court in criminal proceedings. One of them opened on the fact of attempt of capture of the International center of culture and arts (October Palace), the other due to clashes on February 27. The police said that the residents of the tent city resisted, so the police had to detain them: 50 persons were taken to district police.

The people’s Deputy Yegor Sobolev in turn, said that the camp on Grushevsky was “broken”, all the activists who were in it were detained.