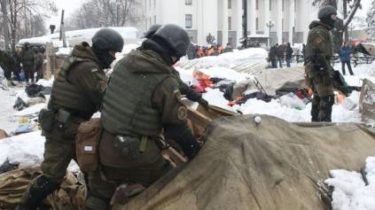 In the result of clashes between protesters and militiamen in a tent camp near the Parliament suffered about 20 people.

This was stated by representatives of the red cross, which provided aid to victims, writes UNIAN.

“There were about two dozen. Was traumatic brain (injury – approx.ed.) was flooded with gas eye. The man had a burn on her arm,” said the medic.

According to the representative of the red cross, the severe injuries people had, also, a man confirmed that among the victims, which they assisted, was and two law enforcement officers.

“To all who needed urgent help, we provided it and passed them in the ambulance and took them to the hospital or wherever needed,” added the medic.

Recall that on the morning of 3 March, law enforcement officers carry out investigative actions near the Parliament by the court in criminal proceedings. One of them opened on the fact of attempt of capture of the International center of culture and arts (October Palace), the other for the collision on 27 February. The police said that the residents of the tent city resisted, so the police had to detain them.

Later it became known that on the territory of the tent camp , the police seized RGD-5 grenades, Molotov cocktails and smoke mines.