Sobolev announced the arrest of all the activists who were in the camp near the Parliament. Police dismantle tents 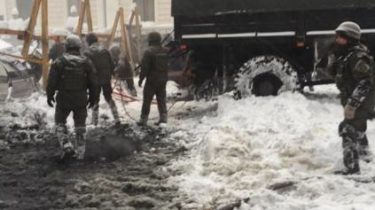 Law enforcement officers detained all the activistswho were in the camp under the Verkhovna Rada and carrying out investigative actions.

This was announced by the people’s Deputy Yegor Sobolev of the “Ukrainian truth”, which is one of the organizers of the rally near Parliament.

In the collision under the Rada injured 14 police officers, opened criminal proceedings

According to him, the police “are looking for what I can give to arms.”

He noted that the camp was from 70 to 100 people, were all arrested and taken to the police Department, probably in the caves.

Sobolev said that among the protesters was injured at least two people, one of whom received a traumatic brain injury. The wounded were taken to the hospital.

“Me and the people’s Deputy Semyon Semenchenko during the assault was not arrested because we are the MPs Going to the caves… RO police,” – said Sobolev.

Now the commandos cleaned the territory near the Parliament and disassemble the tent from the side of the hotel “Kiev”.

Earlier, the representative of the Ministry of internal Affairs Artem Shevchenko said that the police carried out investigative actions under the BP in the investigation of several criminal proceedings according to the court ruling.

We will remind, on February 27, protesters and police scuffled outside the Rada. 14 militiamen were injured. Nine protesters were detained. The police say that the incident gave supporters the policy of Mikheil Saakashvili. In the “new forces” he accused of provoking the authorities.