Leninabad in India. In one of the States demolished the monument to the “leader” and played his head in football 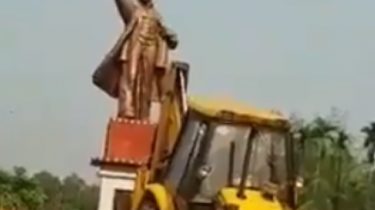 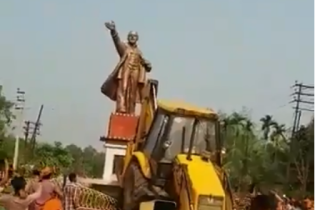 Leninabad in India. In one of the States demolished the monument to the “leader” and played his head in football

Liquidation of the Lenin monument in India © The Indian Express

In the state of Tripura in Eastern India , the supporters of the newly elected party, “Bharatiya Janata party or Indian people’s party” demolished the monument to Vladimir Ilyich Lenin and played a head football.

About it reports The Indian Express.

The monument was erected by representatives of the “Communist party” 5 years ago. The very same political force took power in the region for 25 years.

In South Tripura’s Belonia, a statue of Lenin razed amid chants of ‘Bharat Mata Ki Jai’. This, less than 48 hours after the BJP stormed to power ending a 25-year-long Left rule.

This time the elections were won by the “Indian people’s party”, which has a different position. The Communists have called her representatives communicatable.

As one sound saved Lenin and the USSR

“Witnesses said that after the statue fell, her head was disconnected from the body. And then employees “BJP” played football Lenin’s head,” – said the Communist Tapas Datta.

Members of the “Communist party” claim against them physical force had been used, the leaders of the Communists intimidated, and the like.

We will remind, in Lviv right-wing nationalist organization February 15, with hammers and axes damaged the Monument of glory and tipped the plate and letters.