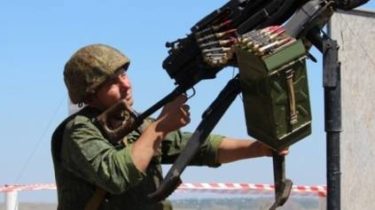 During the day the militants five times shelled the positions of Ukrainian military in the Donbass, neither fighter was hurt.

“Russian occupation troops continue to disrupt the agreement on full cease-fire. From the beginning of the day recorded five attacks on our positions”, – is told in the message.

On Donetsk direction with different types of grenade launchers, the militants fired on the Ukrainian fortifications near the Heater. Rocket-propelled grenades, heavy machine guns and small arms of the invaders three times used by defenders Lebedinsky, in the coastal area.

On the Lugansk direction the enemy from small arms fired at the Ukrainian positions near the settlement Happiness.

“As a result of enemy fire no one Ukrainian soldier was injured. The situation along the line of differentiation of the parties is securely controlled by the Ukrainian defenders,” – said in the headquarters.