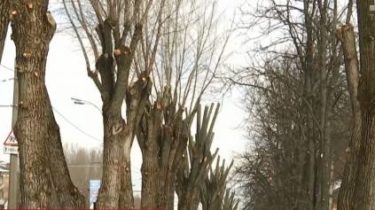 Zelenstroevtsy shocked residents of the capital, when, instead of the shortened branches and remove dry, leave some of the trees trunks.

In Kiev want to ban radical pruning at least two years. Dendrologists say that after such cutting the trees often die, however, the utility is responsible that are in accordance with the sanitary norms, according to a story TSN.19:30.

Employees improvement say they are forced to do extensive work there, where he settled mistletoe, which is parasitic on the branches and sucks the life out of trees all the juices. Cut down thin branches immediately crushed and mulch spiked trees to retain moisture in the summer, and flowerbeds thanks to her not growing weed. Pads same sawing for firewood.

“Selenodesy” shocked residents of the capital, when, instead of the shortened branches and remove dry, leave some of the trees trunks. After such shearing of the tree often die, say the dendrology. However, the utility is responsible that are in accordance with the sanitary standards. 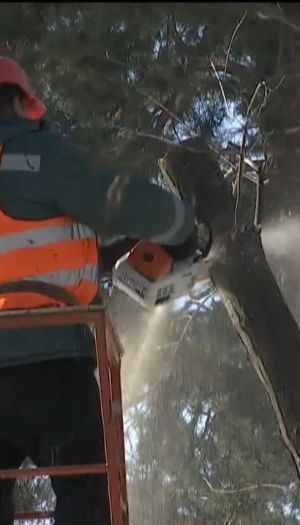 Kiev complained that after the activity of housing and communal services of the once magnificent poplars and chestnut trees which give wonderful shade and protect the house from contamination, remain one of the pencils. Such a “rejuvenation” residents are not happy. “Lop, mutilated”, they say. People suspect that because of the antiseptic unprocessed slices in the trees will get infected and they just die, and the planting of new someone smart will earn a lot of money from the city budget.

In Kiev on a parked car under a fallen tree

But associate Professor University of life Natalia Patrina work justifies says, that such pruning is known worldwide and is known as a deep topping. However, opponents doubt the feasibility of its application to all the trees indiscriminately and previous surveys and public utilities is suspected of trying to earn some money on the production of firewood and mulch. The same such charges referred to as simply meaningless.

To deal with the situation the city Council can create working group which will attend to the study of international experience pruning trees. According to the initiators of its appearance, there is a moratorium on deep topping, and the introduction of clear rules of the care of trees in respect of which there will be questions and complaints, no one from Kiev. At the same time on the streets we can already see mixed with svezheokrashennym – trimmed a few years ago the poplar, which has grown new branches formed the crown. Biologists say that usually the rejuvenation prolongs the tree’s life to ten years, and do it much easier than to plant new trees.