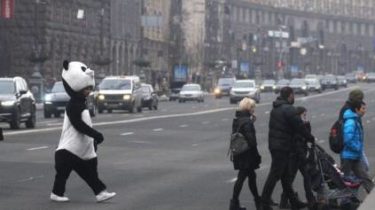 “Entry signs – this is one of the landmarks of our city for those who arrive by road to Kiev”, – said Vitaly Klitschko.

In Kiev continues the replacement of the old entrance signs into town for a new one, each of which will symbolize some feature of the Ukrainian capital.

This was stated by the mayor of Kiev Vitali Klitschko, – informs the press service of Kyiv city mayor.

He recalled that last year set a new mark on Boryspil highway, which leads from the airport Boryspil to the capital.”Anyone who goes from Boryspil can see a 3-meter high letters “Kiev” and the silhouette of the defender of the city – the Archangel Michael,” – said Klitschko.

He noticed that at the entrance to different cities in the world are the symbols of these settlements. “So we decided to install entrance signs with symbols of our city”, – said Klitschko.

The mayor stressed that one of the symbols of Kiev – Princess Olga. Its silhouette, with a height of 18 meters, will be located at the entrance to Kiev from Zhitomir highway.

“Entry signs – this is one of the landmarks of our city for those who arrive by road to Kiev”, – he stressed.

The capital of Spain takes a step toward tourists

Recall that 2017, the number of foreign tourists visiting Kiev, was the highest for the last three years. Early travelers less interested in the Ukrainian capital, but the new statistics showed that the situation is changing for the better. Most visitors to the city attracted by the beautiful temples of Kiev and cheap prices.