Attacks from guns: in the Donbas boywiki continue to aggravate the situation 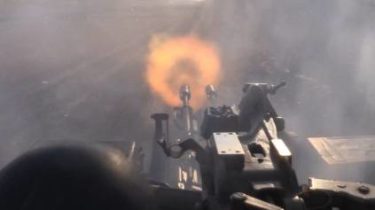 Attacks from guns: in the Donbas boywiki continue to aggravate the situation

Grenade launchers and heavy machine guns used by the military in Happiness.

Over the past day the militants of 54 times fired at positions of Ukrainian soldiers. None of the military was not injured.

In the Donbas killed 19-year-old volunteer from Konotop. The city declared mourning

On Donetsk the direction from the forbidden 122-mm artillery fire was conducted on positions in Shyrokyne, and with 120 and 82-mm mortars, grenade launchers, heavy machine guns and infantry fighting vehicle – the fortifications near Pavlopol and Hnutove. 82-mm mortars was applied near Water and Sand. From grenades of various systems were fired by the military in Avdiivka, Novotroitsk, Experienced, Kamenka, Shirokino, Talakovka and Sand. In addition, fire from heavy machine guns was carried out on the fortifications near the area of Mariinka, and small arms in the area of the Mine Butovka and Novomikhailovka.

#Topad #Foresnic #Donbas #spokesperson #statement the Construction of the Press center of the ATO headquarters for the day March 28, 2018 For…

Posted by the Press center of staff ATO on Wednesday, March 28, 2018

Previously, the defense Ministry said the worsening situation in the Donbass.