A special concert under the ground. The passengers of Kharkiv subway was able to hear the music from zips, pipes, and even vegetables. They created Alexander Cobin, a scientist, and now a musician. He showed the game on unique instruments, some of them exist in a single copy, says the story TSN.12.00.

In the lobby of the metro station sounds all zips, pipes, vegetables, and even kitchenware. Some of the instruments played by the musicians, is unique.

The tool “Navistar” works simply touching the subject sends a pulse to the computer, and that already plays music. The music on the table is a cucumber.

“I touch and it starts playing, that is actually the cucumber plays great music,” says the inventor.

Another tool “Tubulum” – two octaves and fifty meters of sewer pipes. The tool exists in a single copy.

Right in the lobby of one of the stations of the Kharkiv metro sounded rare and unique musical instruments – great-grandfather of modern synthesizers, theremin, made from sewer pipes tubulum and the Tesla coil that played the lightning. The inventors have made music even with kitchen utensils and vegetables – this tool official name, but is able to send electrical impulses to the computer and allows you to create entire musical compositions. 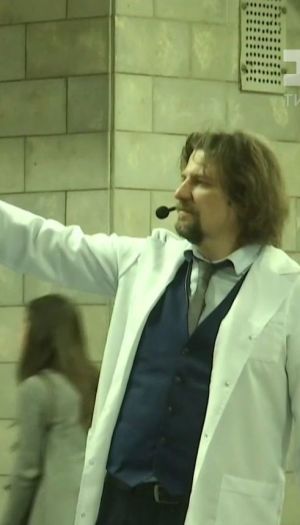 “Theremin” is a rare tool. Great-grandfather of modern synths. And play it without even touching hands. The most dangerous tool – the “Tesla Coil”. With the music playing lightning.

After the show, each viewer allow you to play unusual instruments. The audience loved it, although they say to understand how it all works, you need not only a musical education.

And at the end an unusual concert in the subway classic sounds in the performance of the more familiar tools.