In Russia, the robbers in masks took out from cafe 50 kg dumplings 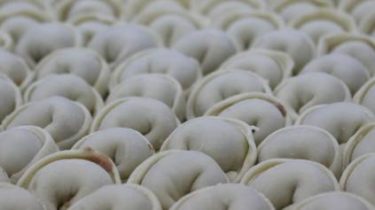 In Russia, the robbers in masks took out from cafe 50 kg dumplings

Video of the robbery was recorded by surveillance cameras.

In the Russian city of Yekaterinburg three unknown in masks robbed the cafe, “Batch”, but their prey were not money, and dumplings.

This writes Znak.com with reference to chef’s chef Vladimir Altnickol.

He said that the robbers broke into the café around 22:00 hours, when the visitors were gone and it was preparing for closure. At that time in the room was the cook-girl. Money was not, because before it was just held for collection.

“But near the box office was a freezer with frozen dumplings — they all raked,” — said the chef.

Crimean club rides matches of the championship of the occupants on the bus, and eats dumplings

According to Altnickol, only the freezer was about 50 kilograms of dumplings. The amount of damage is now being installed. None of the members of the staff were not injured. Cafe owners wrote a statement to the police.