In the new “the simpsons” mocked trump and Putin “declared” U.S. Secretary of state 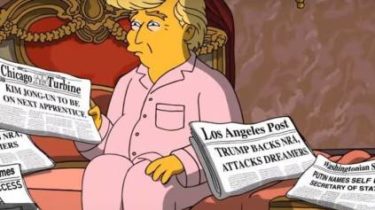 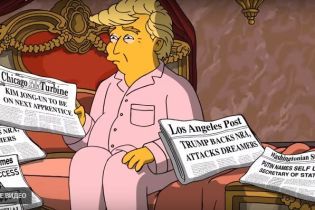 In the new “the simpsons” mocked trump and Putin “declared” U.S. Secretary of state

The animated series “the Simpsons” mocked the President of the United States Donald trump in the short movie “the Story of the two Trumps,” writes The Independent.

In the story, trump is experiencing a big problem with the White house staff and his wife Melania. At one point of the series, he is alone. Trump goes to the mirror and starts to chat with his reflection: “I have to be honest with you. For once in my life. I’m not 100% consistent.”

In Britain, police used a trick from “the Simpsons” to catch 21 of the criminal

After that, he repents his actions, including fraud with taxes and the betrayal of his wife. Then he calls Putin and says he “the little bald fascist.”

In multaka this is not the first mention of the re-elected President of Russia. Earlier in the series, trump supposedly wakes up in the Newspapers. The titles that say “Putin appointed himself the Secretary of state”, “trump criticized the gun lobby, supported the children of illegal immigrants”.

A series of revelations trump leads nowhere. After all these steps, he decided to write something on Twitter and all that he had in his head: “Alec Baldwin wears a wig. Sad!”.