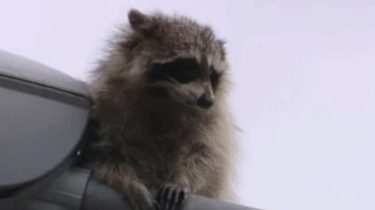 The animal scrambled to a lamppost and did not allow people to get close to him.

In the Russian city of Sochi raccoon spectacularly disappeared from the rescuers who tried to remove him from a lamppost.

For the record, you can see how the raccoon slowly crawls from rescuers on the edge of the pillar, and then suddenly jumps down. His jump is very similar to the one that performed by Tom cruise in “Mission: impossible 6”.

No raccoons were not: a circus made up a story about drunken animals and the pogrom of shop

As noted, the raccoon jumped off the lantern on the stretched awning and ran away. Why the animal climbed to the post is unknown.

Recall that in the U.S. state of Illinois blind raccoon took his bodyguards two cats. When the animal was hard to get down the stairs, one of the cats ran around to insure in case of a fall.