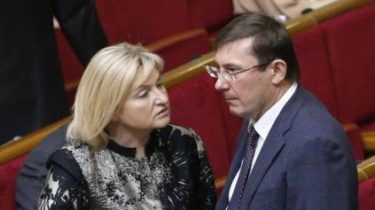 The attorney General does not have its own property and car.

The Prosecutor General of Ukraine Yuriy Lutsenko unveiled the electronic Declaration in 2017. According to the document, last year he received a salary on 1 302 001 hryvnia.

Also the head of the GPU dropped two presents in kind from his son with a total value of 289,35 thousand UAH.

His wife, the people’s Deputy from “BPP” Irina Lutsenko, last year earned in the main job 240,5 thousand hryvnias. Even 252,8 thousand UAH she received as compensation for conducting the parliamentary activities.

In addition, Lutsenko received 1 million 893,5 thousand UAH. income for the alienation of movable property, and more than 1,1 million UAH for the provision of property to rent. Another 28.6 thousand UAH, payments from the insurance company.

Yury Lutsenko has no property and your vehicle. His wife owns an apartment with an area of 181 sq m and commercial premises area of 92.2 sq. m in Kiev. She is also a proprietress of a residential home area 203,9 sq. m and land area of 775 sq m in Dubno, Rivne region.

The attorney General has the right to freely use the apartment of his wife, as well as a residential house with an area of 859 sq. m, land area 2475 sq. m and a garage of 80 square meters in the village car Park in Kiev region, belonging to his father-in-law.

Apartment in Lviv and gifts for half a million. Paruby declared last year’s income