Six more years of Putin: the Network appeared in a stylized Simpsons, a cartoon about the President of the Russian Federation 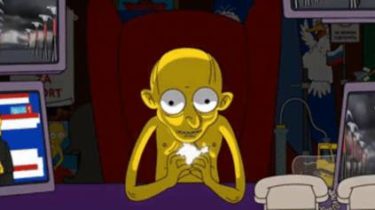 Six more years of Putin: the Network appeared in a stylized Simpsons, a cartoon about the President of the Russian Federation

The video ends with the grim March of the hammers, and Putin becomes like Gollum.

Russian designer Egor Zhgun released cartoon “6 More years of Putin,” which tells about the major milestones of the third term of President of the Russian Federation.

Resembles a Simpsons animated movie in 2.5 minutes told what happened under Putin in 2012 – 2018.

Among other things, in the cartoon you can see the annexation of Crimea, the flight of Viktor Yanukovych from Ukraine, alleged involvement of Russian hackers in the U.S. elections, the destruction of tractors of podcasting tomatoes.

6 hours of questioning the future: from the revelations of the fugitive made a cartoon

The whole movie is accompanied by a TV screen, which broadcasts the main Kremlin propagandists Dmitry Kiselev and Vladimir Solovyov. At the end of the video screens getting bigger, and instead of Kiselyov and Solovyov they begin to show the March of the hammers.

“The screen darkens, and the only source of light becomes the Crimea in the hands of Putin – and the President himself more and more like Gollum from “the Lord of the rings” clasping “my charm,” writes, “Present”, which journalists to the minute spread all of the symbols incorporated in the cartoon Egor Zhgun.