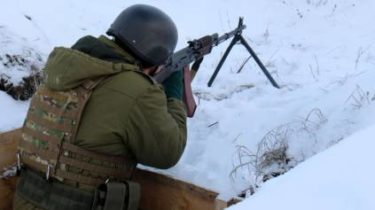 For the last days fighters carried out 32 attacks of positions of forces ATO. As a result of enemy fire no Ukrainian military was not injured.

On Lugansk the direction from 82-mm mortars terrorists fired at the village of Novoluganskoe, and rocket-propelled grenades and heavy machine guns three times on the posts near Lugansk. Heavy machine guns and small arms used near zaitsevo.

On Donetsk the direction from different types of grenade launchers fired at Ukrainian positions in opytne, Novotroitsk, Lebedinsky, Starohnativka, Maryinka and Hnutove. Heavy machine guns and small arms terrorists applied in the area of Avdeevka, Talakovka, Pavlopol and Water, and the BMP – the fortifications in the Sand. In addition, with small arms opened fire on strong points of ATO forces near Shyrokyne, Butovka and Heater.

Informed the special representative U.S. Department of State in the Affairs Kurt Volker saidthat the escalation of hostilities in the Donbas is connected with the peculiarities of the Ukrainian conflict, which has a tendency to periodically increase and fade away.