MPs invited to the Parliament Lutsenko, Sytnyk and Holodnitsky 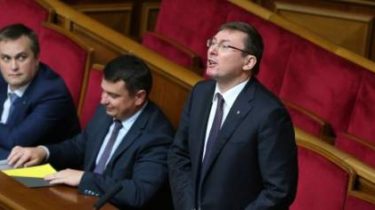 MPs invited to the Parliament Lutsenko, Sytnyk and Holodnitsky

Heads of agencies are expected in Parliament on Wednesday, 4 April.

At the plenary session of the Verkhovna Rada on Wednesday, April 4, invited the Director of the National anti-corruption Bureau of Artem Sytnik, head of the Specialized anti-corruption Prosecutor’s office of Nazar Golodnitsky and Prosecutor General Yury Lutsenko.

As noted, heads of departments were invited to 12 hours.

Also, the speaker of Parliament Andriy Parubiy said that the proposal to invite to the meeting of Parliament leaders of NABOO, ARS and the GPU came from factions.

MPs #Рада8 247 votes supported the suggestion that the plenary meeting on Wednesday the head of SAP Gorodnitskogo Nazar, head of the NABOO @nab_ukr Artem Sytnik and the attorney General @GP_Ukraine Yuriy Lutsenko pic.twitter.com/DBKMvM4HZ6

The basis for opening of criminal proceedings against the Holodnitsky information was received that he impedes the investigation of “Odessa case”.