The failure of the “Easter truce”. The militants fired at the Ukrainian positions more than 30 times 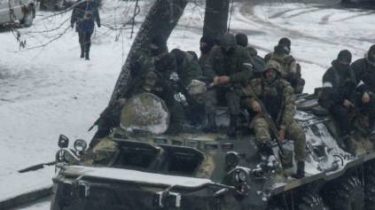 The failure of the “Easter truce”. The militants fired at the Ukrainian positions more than 30 times

The Russian militants occupying forces continue to disrupt the “Easter truce” installed at the demarcation line of the parties from midnight March 30.

As the press center of the ATO headquarters, over the past day, the aggressor has committed 32 attack of positions of the Ukrainian defenders.

In particular, as stated in the message, on Donetsk the direction from 82-mm mortars, grenade launchers and anti-tank guided missile the enemy fired on strengthening military near Talakivka, used grenade launchers in the area Experienced Verhnetoretskogo, Bogdanovka, the Mine Butovka, Lebedinsky and Shyrokine.

At the same time, according to the staff, at the direction of Lugansk from different types of grenade launchers, heavy machine guns and small arms, the invaders fired on strong points of the Ukrainian military near Lugansk. Rocket-propelled grenades, the enemy used near Katerinovka.