“The Minister of internal Affairs is not subject to the President.” Avakov told about his relations with Poroshenko 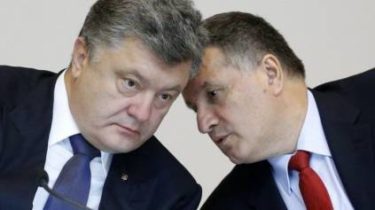 “The Minister of internal Affairs is not subject to the President.” Avakov told about his relations with Poroshenko

He stressed that he tries to keep the balance between the branches of government.

The Minister of internal Affairs Arsen Avakov said that he had no enmity with President Petro Poroshenko, however, he has a head of state frequent discussions.

He stated this in an interview with Liga. net.

“I have no war with Poroshenko, despite all the vicissitudes, which so love to discuss in the press. I firmly stand on their positions on different policy issues and try to keep the balance between the branches of government. I could, using your terminology, “drain” position for the presidential vertical. But I don’t think it would benefit society. And I’m not that kind of person. And many do not like it. Perhaps the President don’t like it either. But we don’t have war. He and I have frequent discussions and working relationship. I will only remind that the interior Minister is not subordinate to the President,” – said Avakov.

The Minister also added that he often talks to the President on public Affairs.

“We often meet with the President Poroshenko. Last time was day before yesterday (the interview took place on Wednesday, March 28, – ed.). It was a conversation between the President and the interior Minister. I’m a member of government, member of the national security Council. So of course, we discussed the operational and political situation in the country. We are not enemies. Each performs its function. I – the function of the Minister, it is the function of the President. Last time we discussed the bill on amendments to the law on citizenship. There is a major change. And discussed the draft law on national security,” – said Avakov.

Earlier media wrote about the conflict between Poroshenko and Avakov due to the fact that protesters managed to set up tents under the Rada last fall.