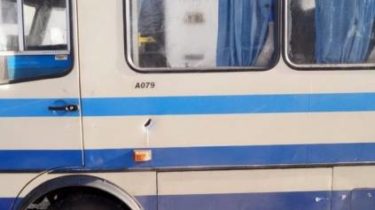 On the status of women do not know anything

The militants of the Russian-terrorist troops wounded civilian woman at the checkpoint, “olenivka”.

“According to local residents on April 6 in the so-called “DNR”, namely near the village of Novoazovsk representatives of illegal armed groups, Ministry of state security detained a local of so. border guards, who were involved in corruption schemes on PPR “Novoazovsk” (bribery). Today, the MGB group arrived at the checkpoint “olenivka” with the aim of testing for other representatives of the so from. law enforcement”, — he wrote.

Slobodyan added that “during the arrest one of the gunmen, the latter pulled a gun and fired a burst, hitting a civilian woman who waited at the bus stop on the temporarily uncontrolled territory”.

“The woman received a gunshot wound. Her condition is specified”, — said the speaker.