In Donbass militants wounded a Ukrainian soldier. Chronicle of the ATO 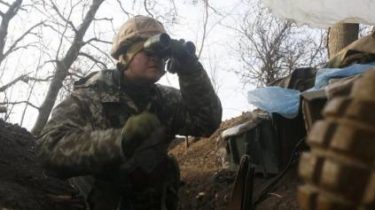 In Donbass militants wounded a Ukrainian soldier. Chronicle of the ATO

For Saturday, the Ukrainian army has recorded 17 enemy attacks.

On Saturday, April 7, in the area of ATO in the Donbas the militants 17 times opened fire at positions of the Ukrainian army.

“The regime of complete ceasefire during the Easter holidays Russian militants occupying forces and will not adhere. From the beginning of day the enemy made 17 attacks on Ukrainian strongholds. As a result of enemy attacks one defender of Ukraine were injured. Our soldier taken to the hospital and he was given the necessary medical assistance,” reads the summary of the press center of staff ATO.

On Donetsk the direction from rocket-propelled grenades, the militants fired at the Ukrainian near Avdiivka and Water, and heavy machine guns – defender Gotovogo. Anti-tank missile system they used in the area of Talakivka, near Shirokino, Pavlopol and Glorious – were sniper fire. Also under fire from small arms were the defenders of the Town, the Water, Nice and Pavlopol.

On Lugansk the direction from manual anti-tank grenade launchers and heavy machine guns, the militants opened fire at Ukrainian strongholds under Lugansk.