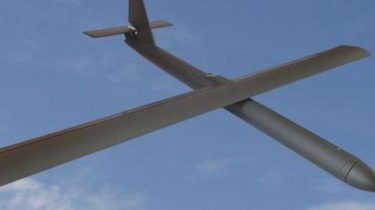 Unmanned aerial vehicle made in the handicraft way.

The Russian militants occupying gangs attempted to carry out a terrorist attack near the demarcation line in the Donbas with the help of a drone, loaded with explosives.

In particular, it is reported that the unmanned aerial vehicle made in the handicraft way “is apparently to avoid identification.”

“Yesterday near the positions of ATO forces found the remains of a homemade unmanned aerial vehicle of the enemy bomb. According to the estimates of the location and position of the aircraft determined that the UAV was moving in the direction of the settlement Verkhneolonetski, but fell in the field. The charge of plastic explosives, which amounted to not less than one kilogram, not detonated, ” – said in the message.

The UAV is assembled on the basis of polypropylene pipes, where the capsule with the combat stuff with a detonator that operates as a result of collision of the UAV with the object. According to preliminary estimates of specialists of the headquarters of the ATO, the aircraft was programmed to defeat the purpose for pre-entered coordinates and performed the flight in automatic mode.

Now the aircraft is being prepared for transfer to employees of the National police for investigation. As a rule, in such cases, a criminal case under article 258 of the Criminal code “Terrorist act”.

At the headquarters of the ATO noted that the use of enemy UAVs kamikaze “is a cynical attempt to implement on the government-controlled Ukraine of the territory of a terrorist act against the civilian population with incalculable consequences according to severity. It is a conscious attempt by the leaders of the Russian occupation forces to undermine and to destabilize the situation in the frontline Vernotico during the Easter holidays, accused of the attack the Armed forces of Ukraine “.