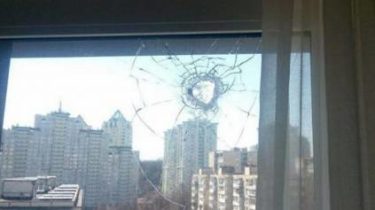 Three young men were detained by the police.

In Kiev, the police detained three suspects in the shooting at the Windows of houses. About it reports a press-service of the patrol police of Ukraine.

According to the report, 7 April around noon, the police asked residents from two apartment buildings on the street Vasyl lypkivskyi and told police that their apartment shoot.

In the center of Kherson, the man opened fire and fled. The police detained his car with an axe and a gun

The window of one of apartments was characteristic lesions, presumably from the shot. In another apartment, the object that looked like a bullet shot got stuck in the wall of the balcony.

Published by the Patrol police of Ukraine on 7 April 2018.

During working off of the territory, the police learned that the alleged attackers could be in one of house apartments on street Kudryashova, and most likely it is from there that did the shooting. For a long time, the suspects did not open the door of the police, but in the end, after long negotiations opened.

In the Zhitomir region fired at the Deputy of the city Council. Man injured

Two men and a woman who were in the room had obvious signs of alcoholic intoxication. The apartment with the help of canine units was discovered a subject similar to the gun. Because he probably carried out the shots.