In Odessa established a special regime of security 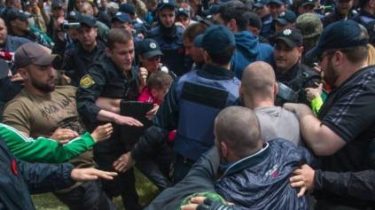 In Odessa established a special regime of security

clashes with the police, the fight © Reuters

Police are urging people not to use banned Communist symbols.

In Odessa, near the monument to the Unknown sailor , law enforcement officers found a reinforced control regime before the celebration of the 74 anniversary of the liberation of the city from the Nazis.

As the correspondent of TSN, the situation is calm and controlled. Guard at the site one and a half thousand law enforcement officers, among whom patrol, state troopers, police officers, “police dialogue.”

In the morning in the meeting place cynologists and bomb experts checked the area for hazardous items, and installed some fencing and metal detectors.

Law enforcement has warned about the ban in Ukraine Communist symbols, which skirmishes.