Three of the wounded soldiers. Day in the Donbass 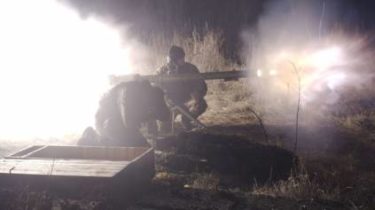 Three of the wounded soldiers. Day in the Donbass

The military were taken to hospitals, they received the necessary medical assistance.

Over the past day Russian-occupation forces have carried out 35 attacks on the positions of ATO forces. As a result of enemy fire, three Ukrainian military were wounded.

In particular, at the Donetsk direction of the prohibited 122-mm artillery militants fired at positions near Shyrokine and Lebedinsky, and 120 mm mortar shells twice near the Water. Also, the defenders Lebedinsky militants opened fire from 82 mm mortars, heavy machine guns and small arms, the defenders of Shirokino, Talakovki, Heaters, Experienced, Marinka, Water and Avdeevka were shelled from grenade launchers of various systems. In addition, heavy machine guns military used in the region of the Food and the Heater, BMP weapons – near the Water, sniper weapons, not far from the Sands and small arms for the military in Gnutovo, day, Nevel, Sand, Pavlopol and the Mine Butovka.

Posted by the Press center of the ATO headquarters on Monday, April 9, 2018

On Lugansk the direction from grenade launchers and heavy machine guns the fire was on the ramparts near the Lugansk. Also under fire from rocket-propelled grenades hit Ukrainian position near Svitlodarsk and Katerinovka.

We will remind, on Easter militants have carried out 35 attacks on the positions of the Ukrainian military , five soldiers were injured.