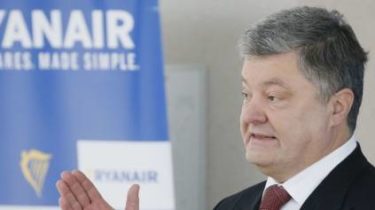 The President of Ukraine Petro Poroshenko wants Ukraine in the near future turned out to be in the first 50-ke of Doing Business ranking, which determines the degree of ease of doing business.

He told this in an interview with German business publication Handelsblatt.

Poroshenko noted that Ukraine over the past four years has risen in the ranking of Doing Business for more than 60 positions from 137 to 76. According to the President, this testifies to the implementation of reforms and improve the investment climate in the country.

“These dynamics is not demonstrated by any one country. And we do our best to be in the near future in the first 50-ke”, – said Poroshenko.

The President said that Ukraine had made a “thorough reform of the tax area”, provided a reform in education, medical and pension sector, and reformatted the energy sector in terms of public procurement and privatization. Also Poroshenko said about the “revolutionary reform of the banking sector”.

“We made progress in decentralization, adapted our APU to the NATO standards, have radically changed the justice system, and the decision on the establishment of Anticorruption court was adopted at first reading by the Parliament”, – said the head of state.

Poroshenko said that many “influential firms came or returned to Ukraine”.

Report of the Doing Business ranking ease of doing business, allows to determine the quality of regulations of business activities that enhance or constrain business activity, and their application in 183 countries and selected cities. The world Bank calculates the index from 2003 on criteria such as ease of starting a new business, obtaining construction permits, registering property, receiving loans, protecting investors, paying taxes, legal protection of contracts, and the like.